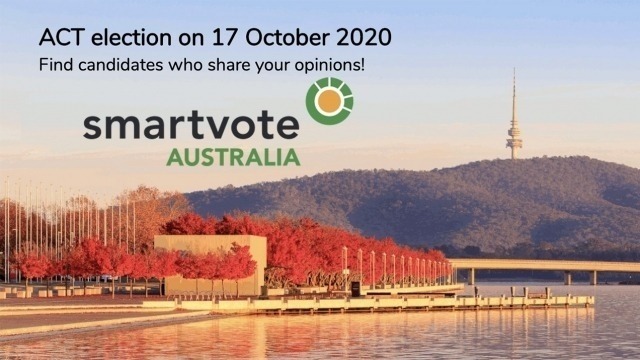 Join over 20,000 Canberrans who have so far elected to make their vote smarter, by finding candidates who share their opinions - using smartvote ACT.

It’s quick, and simple. Candidates answer 32 questions on a wide range of current policy questions. Voters answer the same questions via the smartvote Australia website – then receive a ranked list of candidates who best match their political profile.

More than ever, citizens want to know the positions of people aiming at representing them in parliament and government, whatever the level of authority (local, state/territory to federal). Australia and the ACT have gone through a lot since the end of 2019, with the bushfire season and the covid-19 pandemic having tremendous consequences on daily lives, raising questions about issues such as climate change, public health, the economy, liberties etc., and the measures to be taken to tackle those crises to name but a few.

Smartvote ACT builds on the success of the Swiss tool operated by the politically neutral, non-profit organisation Politools since 2003 and implemented in its Australian version for the 2019 federal level as the first ever candidate-based Voting Advice Application in this country. It had been adapted to the electoral system in use for the election of the ACT Legislative Assembly which calls for additional candidate-level information for voters to express a meaningful vote (this was recognized by a recent amendment to the electoral law) in a compulsory voting context.

Since smartvote is a candidate-oriented tool, it responds to this need by sending all candidates the questionnaire rather than relying on the coding of the positions of the main parties competing at the election. No less than 75% of all the candidates running for the ACT election have taken this opportunity to put their message across – 102 of 137 candidates are currently present on the platform.

Voters are provided with rich information: they receive results from the matching of their responses with those of the candidates in the form of rankings but also several data visualizations in graphs; in addition, they can check all the responses and comments made by the candidates by clicking on the latter’s profile. The voters arrive at tailored-made results by weighting the issues they care the most/less for.

Smartvote ACT thus offers a sophisticated tool for voters, but also an opportunity for candidates and parties to convey their policy preferences to voters at a time where online campaigning is the main avenue to put their message across.

It is a non-partisan research and outreach project run by the School of Politics and International Relations and the Australian Studies Institute, Australian National University (ANU), in partnership with the Canberra Times.